With everyone wanting more out of seemingly every area of their life, the world has moved from simply selling products or services, to marketing experiences, passions and a way of life.

“This generation not only highly values experience, but they are increasingly spending time and money on them…living a meaningful life is about capturing memories earned through experience that span the spectrum of life’s opportunities”¹.

Where traditionally the dream of 2.5 kids, a white picket fence and regular ‘date nights’ to the movies was the norm, these days the paradigm has shifted to become something far more inspirational, experiential and ultimately immersive.

Since the 1950’s the death of cinema has been predicted. Even cinema greats such as Martin Scorsese and Ridley Scott have professed² the demise of conventional cinema. That being said, box office records are continually obliterated, making the premonition of failure farfetched.

With recent movies such as Star Wars: The Force Awakens, Beauty & the Beast, Marvel’s Deadpool and Wonder Woman smashing records worldwide, it is outlandish how commentators can claim such demise. That being said, when adjusted for inflation, Gone With the Wind released in 1939 is still one of the biggest films (financially) of all time!3.

There are a range of challenges when it comes to the box office these days, with the rise and rise of Netflix, Stan, iTunes and Foxtel trying to recapture a share of the ‘streaming revolution’ being one of the most disruptive innovations of recent times.

Despite the claim that cinema is dead, there seems to be an abundance of contradictory evidence within the Australian cinema industry with markets rising and holding since the mid-1980’s. 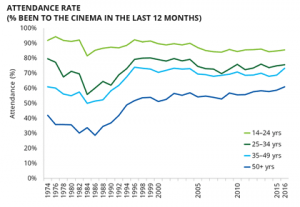 While this may be the case, segments within the industry – as with almost all other industries – are reinventing themselves, to ‘innovate or die’ in the face of traditional market disruption.

So, what is secret cinema?

Launched in 2007, the business has created a 360-degree, immersive cinema experience, where the boundaries between performance, audience and reality are consistently shifting4. This innovative business model takes ‘user experience’ to the next level with a focus on involvement, access to information and immersion in the show while never losing sight of the narrative.

To get an idea of the secret cinema experience, think of walking through an abandoned warehouse, an industrial complex or maybe some housing units that have been transformed into a themed immersive experience. You are greeted at the door by actors, who play the role of perhaps a storm trooper from Star Wars, who usher you into another room where the movie plays all around you, in essence, you are an actor in one of the greatest films of all time.

Created in the UK, the paradigm has shifted to a global model and is now a widespread medium that is seen and enjoyed around the world. The concept focuses around inserting the audience into the movie, rather than simply being a spectator. Some of the best evidence of the power of this medium can be is experienced in secret cinema’s adaptation of Star Wars, this video cleverly depicts how the line between reality and the surreal are often blurred.

What’s the future for secret cinema?

This innovation demonstrates that the cinema industry understands that it must ‘innovate or die’. In an industry that was tagged for demise, it’s not simply going to sit around like the Australian taxi industry and review what they ‘could have done’ after the fact.

Part of the traditional marketing mix, distribution or ‘place’ is one of the most important elements that will define the success of products, services, experiences, industries and companies for the ages to come. Uber, Netflix, Spotify and Apple are all examples of companies embracing distribution, changing the way we listen, read, watch, buy, travel and ultimately consume.

While many people, companies and industries resist change, change is inevitable. It is ever-present and through innovation, embracing the shift and stepping out on a ledge, secret cinema has not only created a new product, market, industry, demand and consumer – it has changed the game.

Ducere Global Business School – with our university partners, are empowering Australia’s startup creators and business innovators with the skills to develop their big ideas.